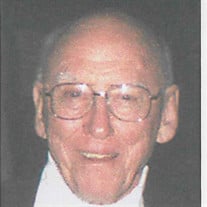 William (Bill) W. Heath, 93, of West Lafayette, IN passed away on April 6, peacefully in his sleep. Bill was born to David L. and Elsie Neuman Heath in Frankfort, IN on May 20, 1923. The family moved to West Lafayette where Bill attended Morton Elementary during which time in 1934 he won the first Soap Box Derby held in Lafayette. Unfortunately, he was eliminated after several rounds at the National Races in Akron, OH later that summer. Bill attended West Lafayette High School and was a member of the Red Devil football and basketball teams where he earned the nickname ‘Spider’ due to his 6’3”, 150 lb. frame. He briefly attended Purdue and became a member of Phi Gamma Delta Fraternity following in the footsteps of his Uncle Paul “Butch” Neuman. He left studying at Purdue to serve in the army during WWII. He trained at Fort Knox, KY, Fort Sill, OK and Ford Ord, CA before being assigned at Schofield Barracks on Oahu where he rose to rank of 1st Lieutenant. After returning to Purdue and earning his Bachelor of Science, he met and married Elizabeth “Betty” Canan in 1952. They were married for 49 years until her passing in 2001. They had two sons, Will born in 1954 and Thomas born in 1961. In 1952, he began his own insurance company, first from the bedroom of their small apartment before sharing space with the Shook Realty Company and naming it Heath Shook Insurance. The company grew over the years merging with other insurance companies and eventually becoming Mayerstein, Burnell, Adams, Heath Insurance (MBAH) in 1978. Bill retired from the business in 1990 and celebrated with a 5 week trip to New Zealand and Australia with Betty. Spider & Betty’s house was the go to spot after many a Purdue football game where the Fijis and Kappas and other close friends would gather for many years after college ended. It was always the fun house to be in. He was able to enjoy playing golf and tennis up thru his late 80s. They provided many a close friendship that continued after the games were over. He remarried in October 2004 to Miriam (Mimi) Riley Epple. Together they enjoyed traveling and wintering in Maui. Bill and his sons have been blessed with a wonderful wife and mom. Mimi is such a joy to have in their lives and has made the last 14 plus years extra special. He was a devoted member of Rotary, Purdue Presidents Council, John Purdue Club, and a lifetime member of Purdue Alumni Association. He was a true gentleman showing concern for others, believing the world can always use one more kind person. He had an amazing sense of humor and an endless supply of jokes, stories and ditties. Bill was preceded in death by his parents, David L. Heath and Elsie Neuman Heath as well as his first wife, Elizabeth (Betty) Canan Heath. He is survived by his two sons, Will (Jill) Heath of Indianapolis and Thomas D. Heath and his partner Michael Bassford of Ft. Lauderdale, FL. His wife Miriam (Mimi), his four step children, Guy Riley, Gail (Tom) Riley, Jane (Greg) Riley, Joan Camacho and grandchildren. Also his brother-in-law, Denny Foster, cousins Nick Neuman and Dave Neuman Internment will be at Grandview Cemetery, West Lafayette, with only a small family graveside service per his request. In lieu of flowers, memorial donations may be made to International Essential Tremor Foundation, www.essentialtremor.org. Spider was always a big believer in giving back. With that in mind he has donated his brain to the New York Brain Bank at Columbia/Yale University for research in the search for a cure for Essential Tremor which is a progressive neurological disorder which also effects his elder son, Will. Simplicity Funeral Care entrusted with care. Share memories and condolences at www.simplicity-funeralcare.com.

William (Bill) W. Heath, 93, of West Lafayette, IN passed away on April 6, peacefully in his sleep. Bill was born to David L. and Elsie Neuman Heath in Frankfort, IN on May 20, 1923. The family moved to West Lafayette where Bill attended Morton... View Obituary & Service Information

The family of William "Bill" W. Heath created this Life Tributes page to make it easy to share your memories.

Send flowers to the Heath family.