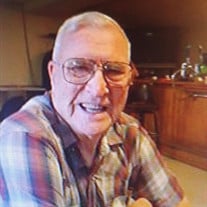 JAMES, Samuel James – 85 Samuel Edgar James, 85, of Delphi, passed away on Wednesday, December 29, 2021 at 11:40 a.m. at his residence. Sam was born on July 29, 1936 in Delphi, to the late Charles E. and Alice (Leslie) James. He married Linda K. Tribbett on January 22, 1969, and they later divorced. Sam served in the US National Guard. He worked as a Welder for Industrial Cab in Flora, and then as a farmer for Loyd Anderson. Sam was a member of First Assembly of God Church for many years. He was there when it first opened and was baptized there. Sam enjoyed fishing, hunting, and mushroom hunting. He really enjoyed walking in the woods and running the river. Surviving are two daughters, Sandra (Franklin) James of Delphi, and Stacie (Joe) Lauridia of Delphi. Also surviving is one brother, Jerry (Mary) James of Delphi, and five grandchildren, Brianna (Ken) Nehrig, Amanda (Adam) Leonard, Nicole Carnahan, Karlie James, and Joshua Carnahan, eleven great grandchildren, and several nieces and nephews. He was preceded in death by seven siblings, Ronald, David, Mary Belle, Phyllis, Rodger, William, and Bessie Ellen. Services will be held on Friday, January 7, 2022 at 2:00 p.m. with visitation one hour prior at Simplicity Funeral Care Chaplain David McKinney officiating. Memorial contributions may be made to the National Autistic Society. Share memories and condolences at www.simplicity-funeralcare.com.

The family of Samuel Edgar "Sam" James created this Life Tributes page to make it easy to share your memories.

Send flowers to the James family.