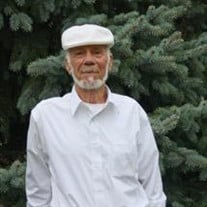 Robert “Bob” L. Bennett, 83, of West Lafayette, passed away at 10:55 pm, Tuesday, January 19, 2016 at Indiana Veteran’s Home. He was born to Charles Otto and Sarah Lucinda (Graeber) Bennett at their family home in Dunn, IN on August 17, 1932. Bob honorably served in the United States Marine Corp. His first marriage was to Janet Opal Laffoon and they had one son, David Lee Bennett and they later divorced. He then married Linda (McCartney) Bennett-Haynes and had one son, Scott Christopher Bennett and they also later divorced. Bob had worked for Edward J. Funk and Sons for many years. Bob was a member of White Horse Christian Center and the Earl Park American Legion, as well as Post 11 of Lafayette. He was an avid outdoorsman and enjoyed hunting, fishing, and was a conservationist. Bob enjoyed sharing his outdoor adventures and stories with his family and friends. He served as a caretaker of the Funk’s hunting lodge in Michigan, where he met many wonderful people who all became a part of his family. Bob enjoyed sports, especially football, and was a Dallas Cowboys fan. He enjoyed riding horses, raising cattle, gardening, shooting sports, woodworking, and was a wonderful cook. Surviving Bob, are his son and daughter-in-law, Scott and Denise Bennett of Grapevine, TX; daughter-in-law, Jennifer Bennett of Earl Park; sister, Genevieve Bower of Kentland; grandchildren, Miranda and Ryan Wirtz of Fowler, Justin and Helena Bennett of Pine Village, and Frankie and Benton Painter of Grapevine, TX; as well as five great-grandchildren, Abigail, Eden, and Savannah Wirtz, and Justin David and Josie Bennett. He is preceded in death by his parents, Charles and Sarah Bennett; his son, David L. Bennett; sister, Wilma Goodman; and brother, Dick Bennett. Services will be held at a later date. Share memories and condolences online at www.simplicity-funeralcare.com

The family of Robert L. Bennett created this Life Tributes page to make it easy to share your memories.

Send flowers to the Bennett family.