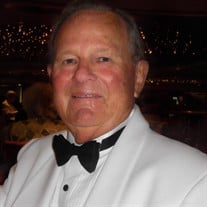 Paul “PJ” Francis Jansen, 89, of Lafayette, Indiana, passed away Friday, June 5, 2020 at Rosewalk Village. A Celebration of Life service will be announced and held in the future. Paul was born October 29, 1930 in Lafayette to the late John L. and Clara (Obermeyer) Jansen. He graduated from Lafayette Jefferson High School and proudly served his country in the United States Army Reserves. On September 26, 1949 he married Phylis Jane Panlener, also of Lafayette. “Jane” preceded him in death on December 11, 2008 after 59 years of marriage. Paul was employed as a butcher before becoming a bookkeeper and then advancing to industrial sales for the Egyptian Lacquer Manufacturing Company. Paul was a member of St. Lawrence Catholic Church where he served as a Lector. He gave freely of his time and served as a Boy Scout leader and master. He organized several boy scout fishing trips to Canada. For years, he and Jane hosted large, weekly family and friend dinners at their home following fun afternoons of seasonal sports (softball, football and basketball). No one was left out. He also enjoyed tennis, pool and ping pong. PJ’s favorite was golf. He and Jane spent winters in Florida where he could continue his golfing passion year-round. Aside from sports, he enjoyed playing many card games, particularly Bridge and Euchre. Socializing was his life and his home was known as ‘the party house’. Paul is survived by his four children: Richard of Lafayette, Charles (wife Gayle) of Antioch, David (wife Ellie) of Honey Brook, PA and Barbara Kurt (husband Michael) of Tierra Verde, FL; his siblings: Catherine Williams and Robert Jansen, both of Lafayette and George Jansen of Mt. Dora, FL; his Grandchildren: Jennifer Koser, Eric Kurt, Miranda Gossett, Debra Lauderdale, Sarah Reimert, Curt Jansen, Allison Dankanich, Nolan Jansen and Kora Jansen; 9 great-grandchildren and numerous nieces, nephews and cousins. Along with his wife, Phylis Jane, he is preceded in death by his parents, brother William Jansen and sister Rose Brown and great-granddaughter Cierra Lynn Lauderdale. Paul/PJ will be missed by all.

Paul &#8220;PJ&#8221; Francis Jansen, 89, of Lafayette, Indiana, passed away Friday, June 5, 2020 at Rosewalk Village. A Celebration of Life service will be announced and held in the future. Paul was born October 29, 1930 in Lafayette to the... View Obituary & Service Information

The family of Paul Jansen created this Life Tributes page to make it easy to share your memories.

Send flowers to the Jansen family.