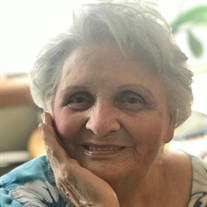 Patricia Anne Messman, 85, of Fowler, passed away peacefully surrounded by her loving family on Friday, February 19, 2021 at 9:05 p.m. at her residence. Patricia was born on January 20, 1936 in Lafayette to the late Kenneth and Juanita (Kellar) Richardson. She married Kenneth J. Messman on January 1, 1979 in Fowler, IN, and he preceded her in death on November 23, 2007. Patricia worked for Ameritech for 25 years before retiring in 1994. She was a member of the First Christian Church in Fowler. Patricia was a member of the American Legion Auxiliary #52, and previously served as the president for 2 years. She was a former Crisis Center volunteer, loved quilting, playing Bingo, and spending time with her family. Surviving are six children, Don (Marion) of Maine, Tina (Garn) Betts of Midvale, UT, Sandra Ekola of Midvale, UT, Richard Ekola of Lafayette, Mia Ekola of Fowler, and Merry (Hank) Carden of Edisto Island, SC, two daughter-in-law’s, Margo Elliott of West Lafayette, and Mary Ekola of Fowler. Also surviving are two brothers, Tom Richardson of Springfield, MO and Kenny Lewis Richardson of Las Vegas, NV, 24 grandchildren, 42 great grandchildren, and 5 great great grandchildren. She is preceded in death by one son, Terry Elliott, one daughter, Sheri Ekola, one brother, Donald Richardson, two sisters, Margaret “Peggy” Rowe, and Connie Ekola, two grandchildren, Sheri Ekola, and B.J. Ekola, and one great grandchild, Erin Tibbett. Memorial Services will be held on Wednesday, February 24, 2021 at 2:00 p.m. with visitation one hour prior at Simplicity Funeral Care with Rev. Kirk Zimmerman officiating. There will also be a Celebration Life held at a later date. In lieu of flowers, memorial contributions may be made to the ASPCA or St. Jude Children’s Hospital. Current Covid-19 precautions will be observed along with social distancing and current government attendance guidelines. Masks are required. The memorial service will also be live web cast, and the link can be located on our website under Patricia’s obituary. Share memories and condolences at www.simplicity-funeralcare.com. https://webcasts.lifetributes.com/1122374

Patricia Anne Messman, 85, of Fowler, passed away peacefully surrounded by her loving family on Friday, February 19, 2021 at 9:05 p.m. at her residence. Patricia was born on January 20, 1936 in Lafayette to the late Kenneth and Juanita (Kellar)... View Obituary & Service Information

The family of Patricia Anne Messman created this Life Tributes page to make it easy to share your memories.

Send flowers to the Messman family.