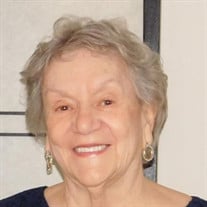 WHEELDEN, Marilyn Sue – 79 Marilyn Sue Wheelden, 79, of Lafayette, Indiana was called home to our Lord on August 23, 2021 at The Springs of Lafayette after being in failing health for some time. One of nine children, Sue was born October 7, 1941, in Princeton, Indiana to the late George Oscar Penner and Neomia Rivers (Coomer) Penner. She was a 1959 graduate of Princeton High School where she played the clarinet in the marching band. Sue lived most of her adult life in Lafayette but spent several years living in Florida and Mississippi near the water, which she loved. She was married to her high school sweetheart Floyd Irwin “Tony” Wheelden who preceded her in death. Sue started her professional career at Purdue University and continued to succeed at Bennett, Boehning and Clary law firm, Eli Lilly, and General Electric. Sue enjoyed cooking, crocheting, gardening, playing games, and was an avid reader. Her longtime companion, Cissy the cat, brought her so much joy. Sue loved our military with a special place for those in the Navy. Surviving are her children, Mitzi (Ron Starbuck) Barnett of Lafayette; Debra (Kitrick) Sheets of Sanford, NC; Kimberly (Kevin) Nunley of Apex, NC; brothers George (Sheila) Penner of San Diego, CA; Donald (Dorothy) Penner of Lafayette; and sisters Velma (Jack) Gilliland of Huntingburg, IN; Jeanie Seals of Princeton, IN; fourteen grandchildren and twelve great-grandchildren; and many nieces and nephews. Preceding her in death are her parents, husband and four sisters, Virginia Hagemeyer, Wanda Penner, Lura Ann Vann and Gwendlyn Kay Canney. A private graveside service is being planned for a later date. Simplicity Funeral Care of Lafayette has the honor of serving the family at this difficult time. Memorial contributions may be made to the American Heart Association, the American Cancer Society, or Almost Home Humane Society. Share memories and condolences at www.simplicity-funeralcare.com.

WHEELDEN, Marilyn Sue &#8211; 79 Marilyn Sue Wheelden, 79, of Lafayette, Indiana was called home to our Lord on August 23, 2021 at The Springs of Lafayette after being in failing health for some time. One of nine children, Sue was born October... View Obituary & Service Information

The family of Marilyn Sue Wheelden created this Life Tributes page to make it easy to share your memories.

Send flowers to the Wheelden family.