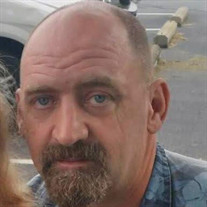 L. Scott Beall, 55, of Delphi, passed away on Saturday, October 30, 2021 at his home. Scott was born on October 4, 1966 in Lafayette Robert W. Beall and Nancy Sue (Harlow) Bartlow, and they survive. He graduated from Harrison High School. Scott worked for Tate & Lyle as a pipefitter, and most recently as a Mason for Hangerman Group. He attended Hickory Grove Church, enjoyed working on vehicles, bowling. Scott was a gentle, loving soul that never harmed anyone. Scott was a big, strong man but was a gentle giant. He would go out of his way to avoid a fight. Scott loved being in the country, sitting on a John Deere tractor baling hay or running a bushhog. He was quite technically proficient, having mastered multiple skilled trades. Scott was a great mechanic, outstanding welder and a accomplished mason. Scott had a great sense of humor, knew about 1000 jokes and could make anybody laugh. He loved playing cards and was a master Euchre player. Scott was the kind of guy that if you called him for help, he would say "On my way!" Being Generous, kind, hardworking and loyal only begins to describe this wonderful man. Scott was a son, brother, father and uncle, but more importantly, Scott was a friend to all those he met. We shed tears of sadness that he is gone from this world. We shed tears of joy that he is in heaven with Almighty God. Surviving is his father, Robert (Ruth) Beall of Ft. Wayne, his mother, Nancy “Suzie” (Dirk) Bartlow of Delphi, and one daughter, Alexa Beall. Also surviving is one sister, Shelley (John) Bowlin, one half-sister, Kelly Beall of Ft. Wayne. He is preceded in death by one sister, Christy Espinosa. Services will be held on Thursday, November 4, 2021 at 2:00 p.m. with visitation one hour prior at Simplicity Funeral Care with Pastor Eric Riddle officiating. Memorial contributions may be made to the American Cancer Society. Share memories and condolences at www.simplicity-funeralcare.com.

L. Scott Beall, 55, of Delphi, passed away on Saturday, October 30, 2021 at his home. Scott was born on October 4, 1966 in Lafayette Robert W. Beall and Nancy Sue (Harlow) Bartlow, and they survive. He graduated from Harrison High School.... View Obituary & Service Information

The family of L. Scott Beall created this Life Tributes page to make it easy to share your memories.

Send flowers to the Beall family.