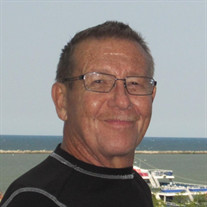 John Carl Williams – 69 John C. Williams, 69, resident of Lafayette, Indiana, passed away on Thursday, December 7th, 2017, at IU Health Arnett Hospital. He was born on August 30th, 1948 in Aberdeen, WA to Lowell and Mauza Williams and married wife, Karrin A. Williams, in 1994. In 1966, John graduated from Elma High School where he was known as a great friend and a stand-up guy. As terminal manager, in 2010, John retired from Auto Warehousing, after 29 years of service. During retirement he donated his time at Oliverio’s Family Restaurant where he became great friends with many customers and employees. John loved watching sports and was an avid fan of the Seattle Seahawks and Indiana Hoosiers. He very much enjoyed spending time outdoors grilling by the pool, and growing tomatoes and cucumbers in the summer. His best buddies were his dachshunds, Harley and Holly. Most of all, John loved spending time with family. John will always be remembered as having the most positive attitude, along with being a loving, caring and generous man. He told the best jokes to anyone who wanted to listen. He always made us laugh! Everyone that knew him, especially his kids and grandkids, will miss him dearly! His wife, Karrin, survives him along with daughters, Amy Swick (Husband: Tracey) of Olympia, WA, Stephanie Shockley (Husband: Chuck) of Battleground, IN, Torrie Hazelbaker, and Carrie Hazelbaker, both of Lafayette, IN; sons Eric Williams of Tacoma, WA, and Matt Williams (Wife: Abigail) of Anchorage, AK; along with his sister Janet Chapman (Husband: Floyd) of Arkansas, and his brother, Lowell Williams (Wife: Linda) of Cathlamet, WA. Also surviving are eleven grandchildren and one great granddaughter. John’s beloved mother, father, and two sisters, Dolly Seccombe, and Gertrude Clark, preceded him in death. He will always be held dearly in our hearts!!! In Lieu of flowers please make donations Riley Children’s Hospital. A private family memorial will be held next spring.

The family of John C. Williams created this Life Tributes page to make it easy to share your memories.

Send flowers to the Williams family.