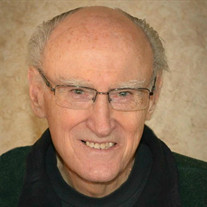 Glen E. Smith, 82, if Oxford, passed away on Saturday, September 3, 2016 at 10:30 a.m. at his residence. Glen was born on April 3, 1934 to the late Theodore R. and Florence Emerson (Keifer) Smith. He married Carolyn A. Lawwill on June 15, 1957 in Coldwater, OH, and she survives. Glen served in the Navy from 1952-1956. He then studied Architecture at the University of Cincinnati. Glen worked for National Homes as the department head in the Multi Family Division from 1965-1985, and then for Farmers Homes Administration as State Architect from 1985 until 1995, when he retired. He was a member of the Congregation of Jehovah Witnesses in Fowler, where he served as an elder. Glen enjoyed sharing with others the hope he had of living in a Paradise Earth that Psalm 37:29 promised. He enjoyed camping, nature, square dancing, ball room dancing, and had a great sense of humor. Surviving are 2 children, Dean (wife: Karletta) Smith of Oxford, and Karen Smith of Oxford. Also surviving are 2 grandchildren, Evan and Madelyn Smith. He is preceded in death by one son, Gary Smith, his identical twin brother, Gene E. Smith, and older brother, Theodore R. Smith II. Memorial services will be held at 3:30, Saturday September 17, 2016 , at the Fowler Kingdom Hall of Jehovah's Witnesses . Visitation will be 1 hour before services. Memorial contributions would be appreciated to Jehovah’s Witnesses, and The American Cancer Society. Simplicity Funeral Care entrusted with care. Share memories and condolences at www.simplicity-funeralcare.com.

The family of Glen E. Smith created this Life Tributes page to make it easy to share your memories.

Glen E. Smith, 82, if Oxford, passed away on Saturday, September...