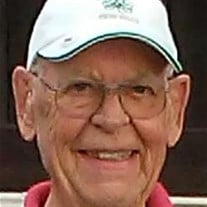 George William Haley passed away early on Saturday, February 24, 2018. He had recently celebrated his 90th birthday with family and friends. George was born Feb. 13, 1928 to F. Garland and Lucy Haley in Lafayette, Indiana. He grew up in the Lafayette area with his parents (now deceased) and his brother James Haley, surviving, in Spokane, WA. George was an enthusiastic Boy Scout and achieved the rank of Eagle Scout, Order of the Arrow at the age of 15. After his midterm graduation from Lafayette Jefferson High School in 1946, George joined the US Navy during WWII. He was assigned to the light cruiser USS Topeka on patrol in the Pacific and served as a signalman. After discharge from the Navy, George attended Hanover College and received his Bachelor's Degree in Education. He received his Master’s in Education from Purdue University. George was an active lifetime member of the Sigma Chi Fraternity. It was also at Hanover that George met his best friend and true love, Jane Donner Stephenson. They married on August 26, 1951 at her parent’s home on Lake Wawasee. They celebrated 59 years of a wonderful life together before she passed away in May of 2011. George is survived by his three daughters; Marci (David) Hudson of Lawrence, MI, Jan Wagner of Tinley Park, IL, and Leslie (Robert) Howe of Atlanta, IN. George was an active part of their lives and also in the lives of his grandchildren of whom he was very proud: Kristan MacDonald, Nathan Hudson, Whitney Childress, Taylor Howe, Elyce O’Sullivan, and Jillian Wagner. He also has 10 great-grandchildren with the 11th due this summer and 1 great-great grandchild. Professionally George Haley was an Educator. He taught at Larwill HS, Klondike HS, Sunnyside Jr. High, and Lafayette Jefferson High School. He was the stage manager for Sunnyside Auditorium and the Jefferson HS Theatre. He touched many lives in his classrooms and in his work in the theatre. He was a member of The International Alliance of Theatrical Stage Employees and served as Lafayette Local 174's President for many years. After retiring from teaching, George worked at the Purdue Elliot Hall of Music as a stagehand. Most recently, George was encouraged by his good friend Bob Haun, who joined the Navy with him in 1945, to sign up for an Honor Flight. George attended the Lafayette Gold Star Mother's Honor Flight in April 2015 and the experience he had was incredibly rewarding and he spoke of it frequently. His family is also grateful to his golf buddies at Battleground GC, the McDonald’s coffee group that adopted him and the wonderful staffs of Bob Evans, the Downtowner, Arni’s and the Triple X restaurants for being part of his extended family. The family will honor George’s express wishes to not have a formal funeral, but we will join together, have a few pots of coffee, and celebrate his life at some time in the future. Condolences may be left online at www.simplicity-funeralcare.com or sent to Leslie Howe, 1598E 500S, Atlanta, IN 46031. If you wish to remember George with a donation to the Lafayette Gold Star Mother's Honor Flight, PO Box 275, Lafayette, IN 47902, you can help send another deserving Veteran from WWII, the Korean War, or the Vietnam War on the Honor Flight.

George William Haley passed away early on Saturday, February 24, 2018. He had recently celebrated his 90th birthday with family and friends. George was born Feb. 13, 1928 to F. Garland and Lucy Haley in Lafayette, Indiana. He grew up in the... View Obituary & Service Information

The family of George William Haley created this Life Tributes page to make it easy to share your memories.

Send flowers to the Haley family.