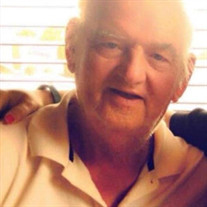 SHARP, Gary E. - 76 Gary E. Sharp, age 76, passed away on September 14, 2020 in West Lafayette, Indiana. Gary was born August 16, 1944 in Frankfort, Indiana to Elbridge and Alice Sharp. In June of 1969 he married the love of his life Connie Cundiff, who passed away in May of 1996. He is survived by his two sisters; Carolyn Beringer and Linda Klinger and his three daughters; Bonnie (husband: Steve) McCauley, Amber Sharp, and Melissa (husband, Derek) Sharp Smith, and his three grandchildren; Nathan, Anthony and Janie, that he loved with his whole heart. Gary worked at Rostone for more than 20 years and was a member of the Iron Horsemen Motorcycle Club in the late 60’s and early 70’s. His hobbies included camping, fishing and being the life of the party. He was always there with a smile to share and a joke to tell. He spread happiness wherever he went, often with strangers he met on his journey through life. His family and friends remember his witty humor and the pranks he liked to pull on them. They will always remember him as a shining light, even in the darkest times. He was always a big fan of westerns, especially anything starring John Wayne. He also loved horror movies, often letting his young daughters watch scary things that their mother wouldn’t agree with. That love of horror movies still remains in his daughter’s hearts today. One special memory is of a campy horror movie from the 1980’s called Chopping Mall that he would always talk about and still enjoyed watching into his 70’s. Lastly was his love of music. He would always play records from the 50’s and 60’s in the living room and dance with his wife and his daughters. They did this a lot through their time together. Even into his later years still knew all the words to those old songs. Johnny Cash, Elvis Presley, and Chuck Berry were just a few of the singers that were a staple in his life. The love he had for his wife was like no other love. He adored her more than life itself. When she passed away 24 years ago, he would never look for another woman because she was his everything. His family takes great comfort in knowing they are now reunited in Heaven. There will be a celebration of life ceremony at a later date. Share memories and condolences at www.simplicity-funeralcare.com.

The family of Gary E. Sharp created this Life Tributes page to make it easy to share your memories.

Send flowers to the Sharp family.