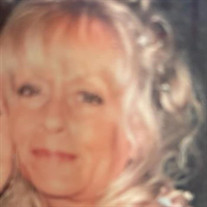 Eva Colleen (Hardesty) Douglas surrendered her battle with cancer to have her seat around the throne on Monday, November 8th, 2021. She was born March 6th, 1953 to Elmer and Agnes Hardesty. She graduated from East Tipp High School and later from Ivy Tech College. She married Ronald Regich in 1973 and had 2 daughters. On July 5th, 1986, she married her devoted husband, Robert Douglas. Eva had an amazing intellect and an innate empathy. She was an avid reader, always seeking knowledge about environmental issues, equality and justice. She was a guiding light to anyone and everyone who had the pleasure of having deep discussions with her. She always said her family was her greatest gift and she loved and protected fiercely. She was tiny in stature, but huge in caring, compassion and devotion. She was the quintessential “dynamite that comes in a small package.” In 1998, she received her nursing degree from Ivy Tech College and pursued her calling. She retired from Saint Anthony Healthcare only when her illness prevented her from continuing to work. Eva poured her heart into all those she cared for and received multiple awards for her care, voted on by her patients. Eva was also a lover of animals and had many furry children throughout the years, that she loved with the same ferocity as her human ones. She is survived by her husband Robert Douglas, daughter, Amber Regich (partner Micah Shaughnessy), grandchildren, Ariana, Chloe and Jaxon Anzaldua, brother, Dale Hardesty (wife Georganne), sister Betty Hardesty, son in law, Jerry Remaly, many nieces and nephews and several “bonus” children and Grandchildren, as she would call them. She was preceded in death by her daughter, Breanne Remaly, her parents, Elmer and Agnes Hardesty, brothers, Clinton Lee and Gilbert Hardesty and granchildren, Gabriel, Ezekiel and Delilah Anzaldua. Services will be held at Simplicity Funeral home Thursday, November 18th. Family visitation from 12:30-1. Open visitation to begin at 1pm Thursday, November 18, 2021 at Simplicity Funeral Care. Funeral service will begin at 2pm. Donations in Eva’s memory can be made to Natalie’s Second Chance rescue. Share memories and condolences online at www.simplicity-funeralcare.com

Eva Colleen (Hardesty) Douglas surrendered her battle with cancer to have her seat around the throne on Monday, November 8th, 2021. She was born March 6th, 1953 to Elmer and Agnes Hardesty. She graduated from East Tipp High School and later... View Obituary & Service Information

The family of Eva Colleen Douglas created this Life Tributes page to make it easy to share your memories.

Send flowers to the Douglas family.