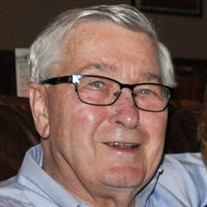 BOLD, Eugene “Gene” – 86 Eugene “Gene” R. Bold passed away on June 2, 2019. Gene was born July 16, 1932 to Nathan and Genevieve (Kazmarek) Bold in Michigan City, Indiana. The family moved to the north side of Chicago where he graduated from Lane Tech High School. While serving in the Naval Reserves he was called to active duty during the Korean War. After service he attended the University of Illinois, Champaign Urbana. Graduating in 1957, he began a successful career in manufacturing. His last position brought him to Lafayette, Indiana where he worked for Rostone as Vice President and General Manager. He met his wife Elaine (Hatala) at the University of Illinois and they were married in 1955. They would have been married 64 years on June 12. He enjoyed history, archeology and traveled the world with Elaine to explore new places and cultures. He loved music and attended the symphony and jazz concerts where ever he lived. A life long Chicago Cubs fan, he attended his first Wrigley Field game at the age of 11 and celebrated their World Series victory in 2016. He is survived by his wife Elaine, son Bill of Portland, Oregon, daughter Lisa of Nashville, Tennessee, granddaughter Amber, great great grandson Devin of Fort Walton Beach, Florida. and his sister, Dorothy Helland (Kris) of Marco Island, Florida. He is preceded in death by his parents, Nathan and Genevieve and brother Alan. By request there will be no service but contributions in memory of Gene can be made to Habitat for Humanity. Share memories and condolences at www.simplicity-funeralcare.com.

The family of Eugene "Gene" R. Bold created this Life Tributes page to make it easy to share your memories.

Send flowers to the Bold family.