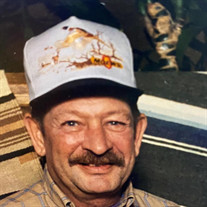 WETLI, Donald D. – 75 Donald D. Wetli, 75, of Fowler, passed away on Wednesday, June 17, 2020 at IU Health Arnett Hospital. Donald was born on May 1, 1945 in Lafayette, IN to the late Raymond and Lillian (Vetter) Wetli. He was a graduate of Freeland Park High School, and served in the National Guard. Donald married Sally L. Justice on August 21, 1987 in Fowler, IN, and she survives. He worked as a farmer all of his life. Donald most liked being a grandpa and was an avid fisherman with his close friends and family, and enjoyed stock car racing. He also enjoyed target shooting and truly loved his entire family passionately. Donald was a member of St. Mary’s Church in Dunnington. Surviving along with his wife, are three daughters, Michelle (Rick) Yates of Fowler, Lori (David) Snodgrass of Oxford, Cassandra Freeland of Earl Park. Also surviving are five siblings, William Wetli of Fowler, James (Maxine) Wetli of Fowler, Rosemary (Steve) Jorganson of Lafayette, Ruth (Charles) Blue of Lafayette, Madonna Wetli of Lafayette, seven grandchildren, and eight great grandchildren. He is preceded in death by two brothers, Raymond Wetli and Thomas Wetli. Services will be held at a later date. Memorial contributions may be made to Fowler State Bank in c/o the Breanne accessible van account, or the PayPal account at [email protected] Share memories and condolences at www.simplicity-funeralcare.com.

The family of Donald D. Wetli created this Life Tributes page to make it easy to share your memories.

Send flowers to the Wetli family.