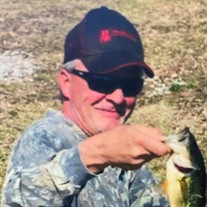 STINGLEY, Danny L. “Dan” – 58 Dan Stingley “Weedhopper”, 58, of Lafayette, passed away on Tuesday, October 13, 2020 at his home surrounded by his family after a battle with Lung Cancer. He was born on June 2, 1962 in Lafayette to the late Joyce Hulett Rock. He attended McCutcheon High School and was a Dump Truck Driver for Solid Finish Construction and a Member of the Teamsters Local 135 for 40 years. He enjoyed fishing, camping, riding motorcycles, and spending time with his family, especially his grandchildren. He was married on August 10, 1993 in Lafayette to Wendy Beaver who survives. He is also survived by his children, son’s, Justin Stingley (companion: Heather Robertson) of Lafayette, Cody (Elise) Beaver of Frankfort, and his daughter’s, Janelle Stingley of Lafayette, Kayla Beaver (Mike Gick) of Rossville, Courtney Doyle (Brandon Spencer) of West Lafayette, and Kiera Cannon of Florida, his sister, Fonda Rock of Lafayette, brother, Rick Stingley of Dayton, his mother and father-in-law, Deborah and Carl Cadwallader Sr., and sister-in-law Amber Rice, Aunt Lisa Nydegger of Lafayette, Uncle Larry (Flo) Nydegger of Dayton, 16 grandchildren, and many extended family members. He was preceded in death by his mother, brother, brother-in-law, great niece and uncle. Services will be held on Tuesday, October 20, 2020 at 2:00 p.m. with visitation one hour prior at Simplicity Funeral Care with Pastor Joe Park officiating. Final interment to follow at Montmorencie Cemetery to follow. Memorial Contributions may be made to the family. Current Covid-19 precautions will be observed along with social distancing. Masks are required. Share memories and condolences at www.simplicity-funeralcare.com

The family of Dan "Weedhopper" L. Stingley created this Life Tributes page to make it easy to share your memories.

Send flowers to the Stingley family.