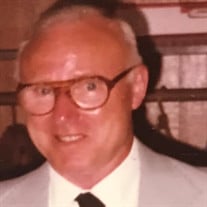 SHUMATE, Clay F. - 96 Clay F. Shumate, 96, of West Lafayette, Indiana, passed away Friday, September 22, 2017 at his residence. Born January 29, 1921, in Clarks Hill, Indiana, to the late Edgar and Iva Bell (Foster) Shumate. Clay married his wife Eva Arlene Kingery on June 23, 1944, she preceded him in death on May 29, 2015. Professionally, Clay worked at Fairfield MFG for over 43 years, retiring as a foreman. He honorably served in the United States Army during World War II. Clay was the former president of The Fairfield Athletic Association and coach of their basketball team. Also, he was a former member of Fairfield’s bowling and golf teams. Clay is survived by his three children, Robert (wife: Karen) Shumate of Avon, IN, Linet Sue (husband: Steve) Tillman of Pittsboro, IN, and Patricia Mason of West Lafayette; four grandchildren and three great grandchildren. In addition to his wife and parents, Clay is preceded in death by his brother, Ralph Shumate and his infant son, Larry Eugene Shumate. Services will be held on Friday, September 29, 2017 at 2:00pm with visitation one hour prior at Simplicity Funeral Care with Celebrant Theresa Fischer officiating. Final interment at Spring Vale Cemetery. Memorial contributions can be made to Lafayette Honor Flight (www.greaterlafayettehonorflight.org or 765-426-1245). Share memories and condolences at www.simplicity-funeralcare.com.

The family of Clay F. Shumate created this Life Tributes page to make it easy to share your memories.

Send flowers to the Shumate family.