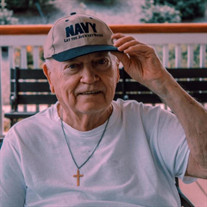 Charles M. “Charlie” Cooper, 87, of Lafayette, passed away Sunday, April 4, 2021. He was born February 9, 1934 to the late Eugene and Velda (Ramey) Cooper. After High School he joined the United States Navy, serving proudly from 1952 to 1956. On March 6, 1955 he married Virginia “Ginny” Nehrig in Lafayette, she preceded him in death on August 20, 2012. Charles worked at Alcoa for 31 years, was a member of Cornerstone Baptist Church, enjoyed woodworking since 1962, 25 year club @ Alcoa and a member of the American Legion Post 11. Surviving are his daughter; Rebecca (Michael) Radice of Lafayette, four grandchildren; Shelby, Riley, Daniel (Megan) and Jennifer (Ben) six great grandchildren; Kaiden, Harper, Rolland, Novah, EverLynn and Virginia. Charles is preceded in death by his parents, wife and Sons; Jerry Allen Cooper and John Ramey Cooper, two brothers; Milton and Phillip Cooper and one sister; Barbara Zink. A Celebration of Life will take place at 11:00 a.m. this Friday, April 9, 2021 at the Corner Stone Baptist Church 2400 Edgelea Drive Lafayette, IN 47909 with Lead Pastor Mike Vauters officiating. Military Honors. Lunch to be served after the service. Please share your memories and condolences with us at www.simplicity-funeralcare.com. In lieu of flowers, donations can be made to the American Heart Association and to the American Cancer Society. Private - immediate family interment will take place at a later date.

The family of Charles "Charlie" Cooper created this Life Tributes page to make it easy to share your memories.

Send flowers to the Cooper family.