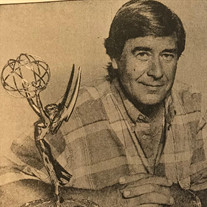 Charles “Chuck” David Mills Charles “Chuck” David Mills, 82, of Lafayette, passed away on Tuesday, February 6, 2018 in West Lafayette, Indiana. Chuck was born February 9, 1935 in the small town of Coffeeville, Mississippi to the late Roy and Kanah (Savage) Mills. He graduated from Memphis Central High School. He proudly served his country in the US Navy aboard the USS Intrepid and attended Purdue University. Chuck enjoyed had various interests, including gardening, photography and Purdue Sports. Professionally, Chuck was known as “The Legend” or “Camera One.” The former Purdue Student worked in Purdue telecommunications for 16 years before becoming a full-time, free-lance cameraman in 1985. And his list of accolades was impressive. He filmed some of the greatest sporting events on earth, including the Super Bowl, the Olympics in Atlanta and Australia, the Indianapolis 500, and the Daytona 500 of which he was particularly fond of. He worked for all the major networks, from CBS to ESPN. For his efforts over the years, he received 5 Emmy Awards. Chuck was truly an innovator and touched many lives of in his long career. He will be deeply missed. Chuck is survived by his wife of 48 years, Doris; children, Kim (Doug) Muinzer of Lafayette, and Chris (Rachel) Mills of West Palm Beach, Florida; sister, Billie Felts of Apple Valley, Minnesota, and Roy (Dawn) Mills of Pickerington, Ohio; grandchildren, Ian (Amanda) Muinzer, Evan (fiancé Abbe) Muinzer, Reagan Muinzer, and Lauren Muinzer and Anthony Mills; and a great-grandson, Maverick Funk. At Chuck’s request, no immediate services are planned. However, at a later date, his family will be scheduling a Celebration of his Life. In lieu of usual remembrances, memorial contributions may be directed to the American Cancer Society (cancer.org). Simplicity Funeral Care in Lafayette is handling arrangements. Share online condolences at www.simplicity-funeralcare.com.

The family of Charles "Chuck" David Mills created this Life Tributes page to make it easy to share your memories.

Send flowers to the Mills family.