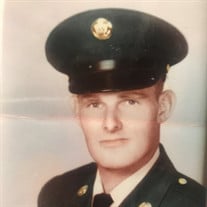 Carl Lee Stevens, Sr., 84, of Lafayette passed away on Friday, August 30, 2019 at 7:30 a.m. at Mulberry Health. Carl was born on June 8, 1935 in Lafayette to the late Edward and Emma (Veech) Stevens. He was adopted at the age of 9 by Ike and Beverly Eberly and grew up in Pine Village, where he later graduated from Pine Village High School. Carl served in the US Army for 15 years, separating as a Staff Sgt. He was a combat veteran of Korea 1st Cavalry, and was a Drill Instructor during the Vietnam Era. He married Marilyn McCall on August 29, 1976 in Lafayette, and she preceded him in death on March 11, 2009. Carl worked as a farmer, worked at Pillsbury Green Giant for 14 years, was a truck driver for Wabash Center for several years, and later worked Security for LUM. He loved IU Men’s Basketball, was a Cubs fan, loved to fish, play guitar, and enjoyed boxing. Carl loved his grandchildren very much. Surviving is one son, Carl L. (Rebecca) Stevens Jr. of Dayton, and two grandchildren, Sarah Stevens and Brody Stevens. He is preceded in death by seventeen siblings. Services will be held on Friday, September 6, 2019 at 10:00 a.m. with visitation one hour prior at Simplicity Funeral Care with Rev. Tom Camp officiating. Final interment to follow at Tippecanoe Memory Gardens. Share memories and condolences at www.simplicity-funeralcare.com.

The family of Carl Lee Stevens Sr. created this Life Tributes page to make it easy to share your memories.

Send flowers to the Stevens family.