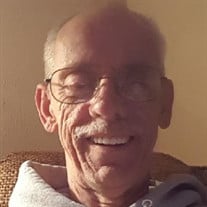 Carl R. Page, age 62, of Otterbein, passed away at 9:10 a.m. Friday, October 27, 2017 at St. Elizabeth East. Born on January 6, 1955 in Allegan, MI, he was the son of the late Edward Page and Dorothy (Simmons) Page. He married Deborah Humphrey, the love of his life, on September 3, 1977 in Kentland and she preceded him in death on March 29, 2014. Carl formerly worked at Union Carbide/Viskase for 27 years and Menards for 14 years and retired in 2015. He loved spending time with his family, especially his grandchildren. He also loved meeting up with his friends for meals and just to catch up. He was a Michigan Wolverines and Detroit Lions fan, also loved Nascar. Surviving are his children: Carl G. Page (wife: Destiny) of Taylors, SC, Donald Joseph Page (wife: Krista) of Frederick MD, Denise Jessie (husb: Timmy) of West Lafayette, Jimmy Page (fiancee’ Kalee Tarter) of Fowler and Rachael Page of Otterbein, sister: Bonnie Ward of Allegan, MI, brother-in-law: Randy Humphrey of Rensselaer, 15 grandchildren and 4 great-grandchildren, several nieces, nephews, cousins, 2 aunts and 1 uncle. He was preceded in death by a brother: Chuck Page and brother-in-laws: Kenny Ward and Mike Humphrey Celebration of Life service will be held at a later date and announced by the family. Any monetary donations can be made to his family to help with expenses. Simplicity Funeral Care entrusted with care. Share memories and condolences online at www.simplicity-funeralcare.com

The family of Carl R. Page created this Life Tributes page to make it easy to share your memories.

Send flowers to the Page family.