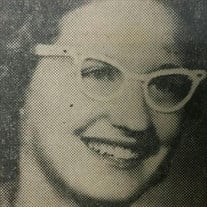 CUNNINGHAM, Aretha R. – 76 Aretha R. Cunningham, 76, of West Lafayette, passed away at 8:39 pm, Saturday, November 14, 2015 at St. Elizabeth East. Born August 18, 1939 in Posey County, she was the daughter of the late David and Aretha G. (Draper) Mosby. Aretha graduated from Lafayette Jeff High School in 1957. Her first marriage was to Clarence William Pence on September 22, 1957 and he preceded her in death. Aretha wed James H. “Hugh” Cunningham on November 13, 1981 and he preceded her in death on September 2, 2014. Aretha worked as a waitress at Howard Johnson for 24 years, and retired from CTS Electronics after working there for 24 years. She was a member of the Ladies Auxiliary of American Legion Post 492, Quilting Club, and enjoyed going to quilting shows. She cherished time spent with her family, especially her grandchildren. She is survived by her three children, Darlene McNeeley of Wellington, IL, Mona Nightengale (husband: Isaac) of Monon, and Melanie Carnahan of Indianapolis; and three siblings, Davida Segal of Frankfort, Robert Mosby (wife: Juanita) of Wolcott, and John Mosby (Floie) of Mt. Vernon. She is also survived 8 grandchildren, 13 great grandchildren, as well as many nieces and nephews. Preceding her in death with her parents and husbands are 3 sisters, Velda Jones, June Mosby, and Nellie Clevenger, and brother, James Mosby. Funeral Service will be held at 2 pm, Wednesday, November 18, 2015 at Simplicity Funeral Care with visitation one hour prior. Celebrant Amanda Atkins officiating. Interment to follow in Tippecanoe Memory Gardens. Share memories and condolences online at www.simplicity-funeralcare.com

The family of Aretha R Cunningham created this Life Tributes page to make it easy to share your memories.

Send flowers to the Cunningham family.